Acacia baueri is a small, upright shrub rarely exceeding 1 metre in height. The phyllodes are about 150 mm long, rounded in cross section (terete) and often with scattered hairs. There are two subspecies recognised, subsp. baueri and subsp. aspera. The latter is restricted to the Blue Mountains area and has very pronounced tuberculate branches (warty).

The bright yellow flower clusters are globular in shape and are produced in the phyllode axils during spring. The clusters occur singly, in pairs or on short racemes. The flowers of subsp.aspera are held on short peduncles (flower stalks) and tend to be hidden among the foliage. The flowers are followed by slender, straight seed pods about 10-25 mm long.

A.baueri is not widely grown but is a useful small shrub for coastal areas. It is reliable in a range of soils and can tolerate some inundation. It flowers best in full sun or dappled shade. Because of its habit, the plant takes up little space and is particularly useful for smaller gardens.

Propagation is relatively easy by normal seed raising methods following pretreatment by soaking in boiling water or by scarification. Cuttings have also been successful. 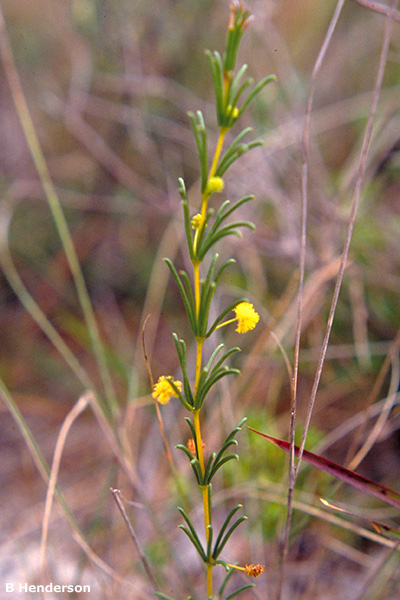