Acacia mitchellii is a small to medium shrub up to 2 metres tall. It is one of those species which retain the fern-like, bipinnate foliage throughout their lives (in most other species, the bipinnate foliage is replaced by flattened stems called phyllodes). There are usually 2 to 7 pairs of leaflets which are greyish green, elliptical to narrowly oblong in shape and 2-5 mm long by about 1.5 mm wide. The white to pale yellow flowers occur in ball-shaped clusters in the axils of the leaves. Flowering is mainly in spring to summer.

Apparently there are differences in the characteristics of the two populations which may be sufficient for separation as distinct species.

A.mitchellii is not a widely grown species and its reliability may depend on the provenance of the seed or cutting material used for propagation. The form from north eastern New South Wales could be expected to be better suited to humid climates than the Victorian/South Australian form. A well drained soil in full sun or light shade should be suitable. The species is tolerant of at least moderate frosts.

Propagation is relatively easy by normal seed raising methods following pretreatment by soaking in boiling water or by scarification. Propagation from cuttings has also been reported as being successful. 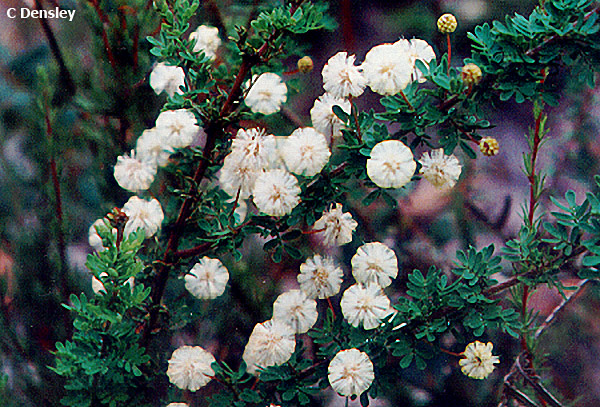