Adenanthos is a genus of about 30 species in the Protea family (Proteaceae). Most occur in south Western Australia but one species is found on Kangaroo Island and another occurs in South Australia and western Victoria. Few members of the genus are seen in cultivation.

A. x cunninghamii was previously regarded as a distinct species but is now believed to be a natural hybrid between A.sericeus and A.cuneatus, which both occur in the same area as the hybrid in the wild. It is a spreading to erect shrub usually about 1-1.5 metres high but sometimes taller in the wild. The foliage is silvery-grey and the leaves have three linear lobes. The tubular-shaped, pink to dull red flowers occur singly in the leaf axils and are seen in spring.

Despite its natural habitat in a dry summer climate, Albany woollybush has been successfully cultivated in a range of climates including those with humid summer conditions which are often unsuitable for plants from the south-west. It prefers well drained, light soils in full sun or dappled shade. Although not a spectacular flowering plant its beautiful, soft leaves make it one of Australia’s most outstanding foliage plants. The flowers produce nectar and attract honeyeating birds. 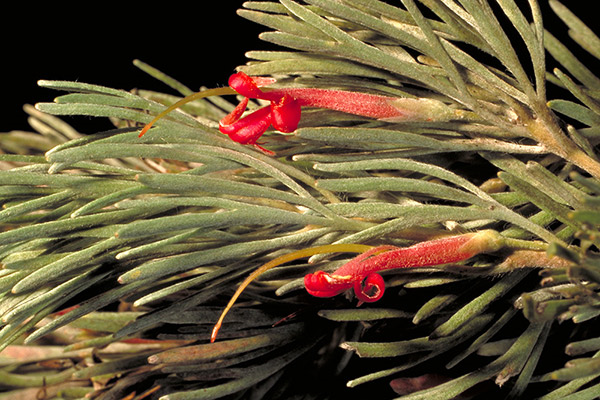