Alyogyne is a genus of 5 species, all occurring naturally only in Australia. The genus is closely related to the widely cultivated Hibiscus which differs in having a divided style (the female part of the flower). All species of Alyogene (except for A.cravenii) were previously included in Hibiscus. Alyogyne is also related to the well-known Sturt’s Desert Rose, Gossypium sturtianum.

A.huegelii is a medium, open shrub reaching about 2-2.5 metres in height by a similar spread. The leaves are bright green, up to 70mm in length and deeply lobed. The flowers are large (up to 120mm in diameter) and have five, slightly overlapping petals. They are usually mauve to purple in colour but white and yellow flowered forms are known. Like its relative, Hibiscus, the individual flowers last only 1-2 days but new flowers continue to open over a long period, generally in summer and autumn. The flowers are followed by a green seed capsule about 20mm in diameter.

Alyogyne huegelii is an excellent landscaping plant for drier climates but can also be successfully cultivated in temperate and sub-tropical areas. It is fast growing and may tend to an untidy habit unless pruned annually. It is tolerant of at least moderate frosts. The species prefers a sunny position but will tolerate some shade and succeeds in a range of soils provide drainage is good.

Propagation from seed is relatively easy and no special pretreatment is needed. Cuttings also strike readily. 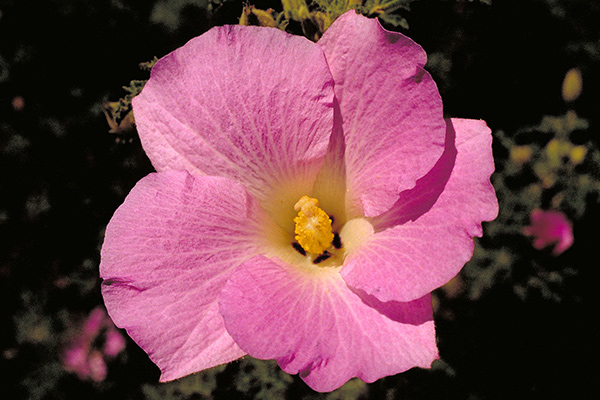 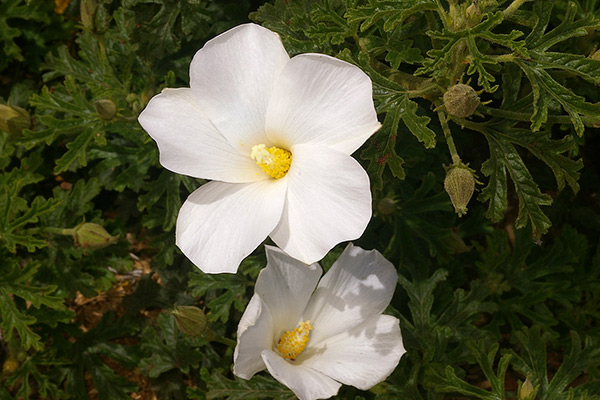