The Kangaroo Paws comprise a small group of 11 species in the genus Anigozanthos and a single species in the genus Macropidia. They are perennial herbs consisting of strap-like leaves arising from underground rhizomes. Flowers occur in clusters on stalks which emerge from the bases of the leaves. A number of species die back to the rhizome in summer, regenerating in autumn. All species are restricted in distribution to the southern areas of Western Australia.

Because of their horticultural potential, numerous hybrids of Anigozanthos species have been developed, often using the very hardy A.flavidus as one of the parents. Only commercially released in 1997, Anigozanthos ‘Bush Pearl’ is a hybrid from A. ‘Bush Lantern’ (itself a sport from A. ‘Bush Opal’ which is a hybrid from A. humilis and A. bicolor) and A.flavidus. It is a clumping plant with perennial leaves 300-400mm long spreading to 500mm in diameter. The mauve pink flowers occur on compact, branched stems to 60 centimetres tall. Flowering is usually from spring through into early summer but flowers may persist throughout the year in favourable climates.

For best flowering, A. “Bush Pearl” should be located in a sunny position and be well watered. Annual fertilising after flowering using a general purpose fertiliser may be beneficial.

As A. ‘Bush Pearl’ is a hybrid, seed, if it is set, will not produce plants similar to the parent. As with all cultivars, propagation needs to be carried out by vegetative means, in this case by division of the clump, usually after flowering. Hybrid kangaroo paws are propagated commercially by tissue culture. 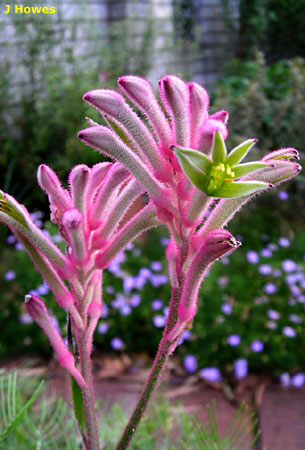 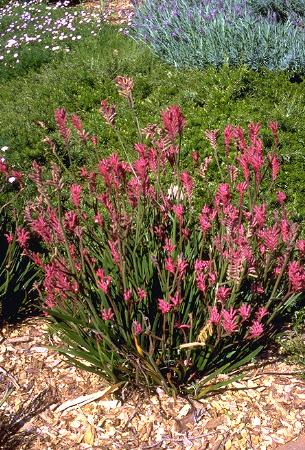