Banksia aemula (previously also known as B.serratifolia), is common in coastal heaths from about Sydney to Bundaberg in Queensland, generally on sandy soils. Its furthest occurrence inland is at Agnes Banks in western Sydney where it is about 60km from the coast.

The wallum banksia is very similar to B.serrata (the “old man banksia”) and can be difficult to distinguish from that species. B.aemula is generally a smaller plant but the principle difference between the two species is the shape of the pollen presenter, the enlarged part of the style of the flower. In B,aemula the pollen -presenter is short and dome-shaped while in B.serrata it is long and narrow (as shown in the diagram). In the few locations where B.aemula and B serrata occur together (as at Agnes Banks), hybrids have been observed.

B.aemula may reach 8 metres in height but is more often a robust large shrub. The flower spikes are about 85 mm wide by about 100 – 150 mm long. They are usually cream or pale yellow in colour and are followed by seed cones with very large protruding follicles. The leaves are large and stiff with serrated edges.

The species is relatively easy to cultivate in many areas of Australia but requires good drainage. It tolerates at least moderate frost and is excellent for attracting honey eating birds. It is not as readily available in nurseries as B.serrata despite being a more versatile plant for a small garden due to its smaller size.

Propagation from seed is reliable and cuttings also succeed but may be slow to strike. 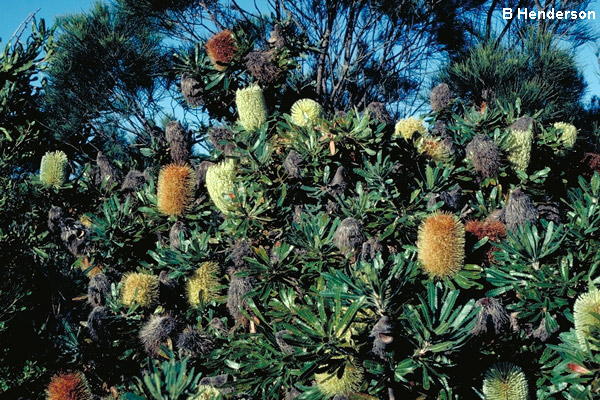