Banksia coccinea is generally a shrub to about 4 metres but can grow taller. The leaves are broad with toothed margins. The conspicuous flowers are fairly squat in comparison with other banksias and bright orange/red in colour. The spikes are about 100mm wide by a similar length and are held terminally on the stems. They are seen in late winter through to early summer (June to January). The seeds are enclosed in follicles attached to a woody cone and are generally retained within the cone until burnt.

Banksia coccinea is a very desirable garden plant because of its dramatic habit and spectacular flowers. However, it readily succumbs to the root rot fungus Phytophthora cinnamomi, which flourishes in areas of summer rainfall and humidity. Thus, cultivation of this plant is next to impossible on the east coast from Sydney northwards. It prefers sandy, very well drained soils and has been grown with some success on the sandy soils of the Mornington Peninsula, southeast of Melbourne, as well as in Adelaide. The terminal flowers are ideal for cut flower arrangements and plantations of suitable forms of the species for the cut flower trade are being developed in suitable areas. B.coccinea ‘Waite Flame’ and ‘Waite Crimson’, which were developed at the Waite Institute near Adelaide, are two examples of this.

Propagation of B.coccinea from seed is relatively easy but cuttings may be difficult to strike. 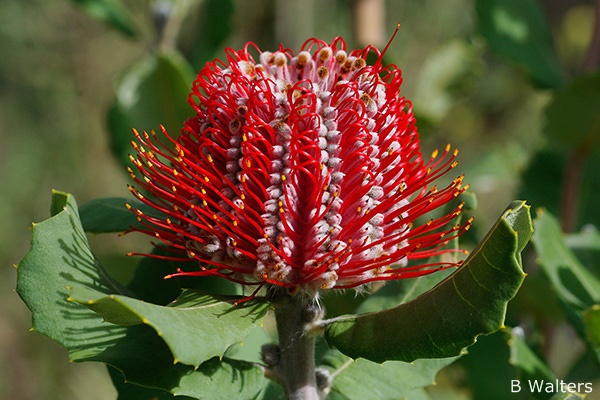