Heath-leaved banksia is one of the best known members of the genus, having been in wide-spread cultivation for many years. Two botanical varieties are recognised; var. ericifolia and var. macrantha. The main difference betwen the varieties is the larger individual flowers of the latter variety. The two varieties have distinct distributions which do not overlap. Var.ericifolia is found from around Kulnura, north of Sydney, south to about Jervis Bay and in adjacent mountain areas. Var.macrantha is found north from about Forster on the NSW mid north coast to Murwillumbah on the far north coast.

Both varieties of Banksia ericifolia are medium to large shrubs with narrow , linear leaves to about 15 mm long. The flower spikes are 80 – 110 mm wide, up to 500 – 600 mm long and usually orange in colour, although there is a form with maroon flowers in cultivation and another with whitish flowers with red styles. B.ericifolia is one of a group of banksias with “hooked” styles projecting from the axis of the flower spike. The flowers occur in autumn and winter and are followed by woody seed-bearing cones.

B.ericifolia is fire-sensitive in that it does not have a lignotuber for vegetative regeneration after bushfires. The species relies on seed for regeneration – seeds are retained in the cones for many years and are released by the heat of a fire.

All forms of B.ericifolia have proven to be reliable in gardens in a wide range of districts. The plant prefers acid soils, preferably light to medium bodied and well drained. It will grow successfully in full sun or semi shade and is one of the best plants for attracting honey-eating birds. Fertilisers with a high phosphorus component should be avoided.

A popular Banksia cultivar, “Giant Candles” is thought to be a hybrid with B.ericifolia and B.spinulosa as its parents. 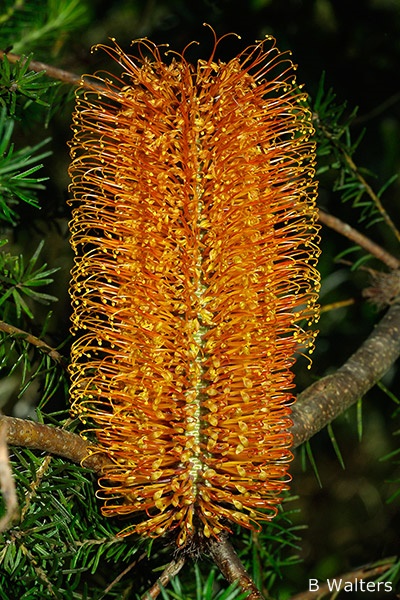