Two subspecies of Banksia leptophylla are recognised (these can be difficult for the non-botanist to tell apart unless they are viewed side by side):

B.leptophylla is so named for its fine foliage – the linear leaves are green and measure 40 to 100 mm long by 1 to 1.5 mm wide. The spherical to ovoid inflorescences are 7-12 cm wide and occur on short lateral branchlets and are pale to medium yellow or pale brown in colour, sometimes with purplish styles. The seeds are enclosed in follicles attached to a woody cone and are generally retained within the cone until burnt.

Both subspecies are fire-sensitive; they rely solely on seed for regeneration after bushfires.

B.leptophylla is rarely cultivated but both subspecies should require a Mediterranean climate (i.e. wet winter, dry summer) and sandy soil to do well. In common with other western banksias, the species is likely to be difficult to establish in areas with humid summers. 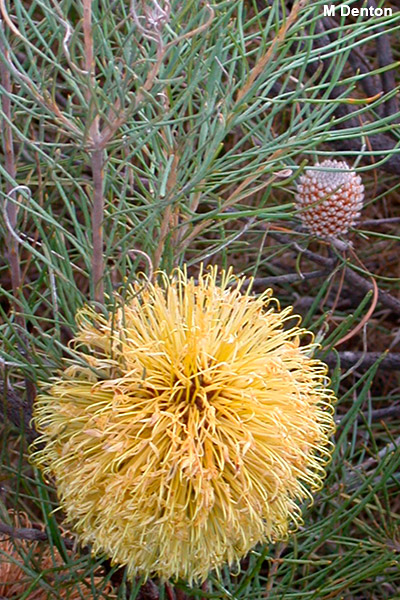