As a result of the transfer of the genus Dryandra to Banksia, Dryandra ferruginea was renamed Banksia rufa as the name Banksia ferruginea had been previously applied to a plant taxon, although the name B.ferruginea is not current.

Banksia rufa is a small, variable shrub ranging from completely prostrate to a rounded form 1-1.5 metres in height. Generally the leaves are narrow and long (up to 450 mm) with triangular lobes and having sharp points. The individual small flowers occur in inflorescences on the ends of short branches but they are often held within the plant and may be partly hidden by the foliage. Flower colour may be cream, yellow, orange or brown. The inflorescences are surrounded by brown bracts, giving a Protea-like appearance.

The variability in habit has led to seven subspecies being recognised. The following brief descriptions of the subspecies is based on information in Florabase:

B.rufa has been grown by enthusiasts for some years but is not widely cultivated. It can be expected to be difficult to maintain in humid temperate and tropical areas. Excellent drainage and a sunny location are preferred. It is reported to be slow growing. 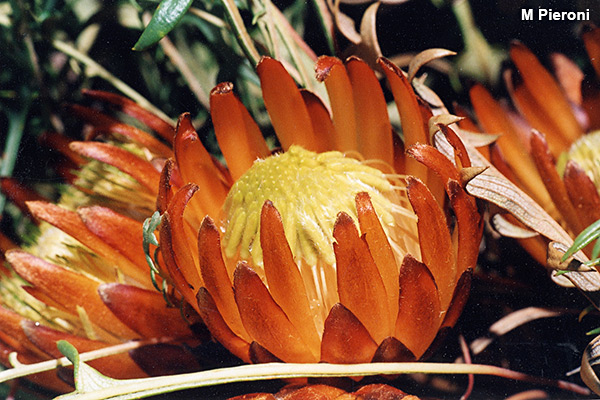