Banksia speciosa is an imposing shrub or small tree whose flowers are often commercially used in cut-flower arrangements. Mostly a many branched shrub to 4 metres, it may sometimes grow to double that size. The linear leaves may reach 45 cm long, and are divided into small, triangular lobes. They are green above and white underneath. Flowering may occur at any time but generally peaks in summer and autumn. The attractive, ovoid inflorescences are up to 12 cm long, 9 or 10 cm wide and cream to pale yellow in colour. The seeds are enclosed in large, woody follicles and are generally retained within the cone until burnt.

Banksia speciosa is fire-sensitive, and rapidly grows from seed after bushfire. It grows on deep sand in shrubland in nature. Though it is widely distributed, B.speciosa has succumbed in large areas of its natural range where it has been exposed to dieback fungus (Phytophthora). This could pose a risk to its survival in the future.

Due to its attractive flowers, Banksia speciosa is fairly commonly cultivated. It is a vigorous and quick growing shrub if given a well-drained sandy soil, dry summer climate and a sunny aspect. However it is extremely sensitive to rootrot which will kill it quickly. In humid climates, plants may grow quickly and appear to be doing well until they succumb to Phytophthora.

Propagation is generally from seed. There has been some success with grafting using its closest eastern relatives, Banksia serrata and B.aemula as rootstocks. A grafted specimen on B.serrata has lived and flowered for many years in the Australian National Botanic Gardens in Canberra. More recently, B.aemula (which has a smaller lignotuber than B.serrata) is being trialled, though it will be several years before results are known. 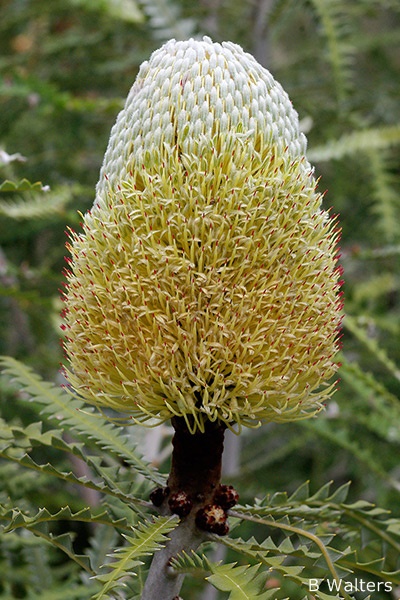