Banksia sphaerocarpa is a shrub to about 2 metres high. The leaves are narrow linear and up to about 100 mm long. by 1.5 mm wide. The obovoid inflorescences are seen in summer to autumn and are about 9 cm wide at flowering, occurring on short lateral branchlets. They are yellow-brown to orange in colour.

This species develops a lignotuber and can regenerate by vegetative means from the lignotuber if the upper parts of the plant are destroyed by fire. It can also regenerate from seed.

B.sphaerocarpa has been in cultivation for many years in a range of different forms, some of which have since been described as different species (eg. B.grossa, B.leptophylla). It is best suited to areas with a dry summer and can be difficult to maintain in humid areas. It requires sandy, well drained soils in full sun or partial shade. It is is moderately frost hardy and will tolerate hard pruning once established as it can send up new branches from the lignotuber.

Propagation from seed is reliable without pre-treatment and cuttings also succeed but may be slow to strike and success rate may be well below 100%. 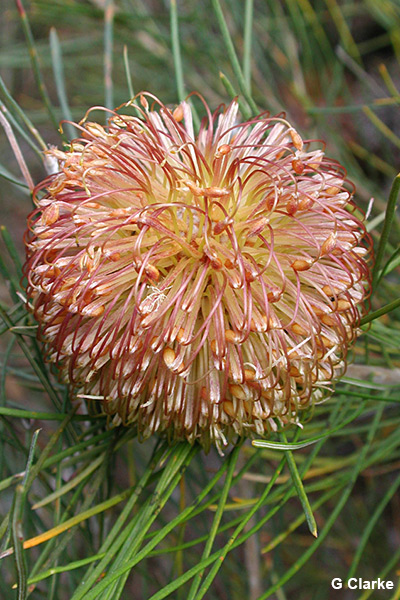