Billardiera is a genus of about 25 species, mainly light climbers or small shrubs. All occur only in Australia with the majority being found in Western Australia. The genus includes species formerly included in the genus Sollya. Relatively few species are cultivated, the best known species being Billardiera heterophylla which was previously known as Sollya heterophylla (and it is still widely grown under that name).

B.heterophylla is a moderately vigorous climbing plant whose branches twine around the stems of other plants. The leaves are bright green and about 50 mm long. The flowers are bell shaped, up to 10 mm long and are usually seen in summer. They are usually deep blue in colour, occurring in clusters of 2 or more. The greenish-blue fruits are about 20 mm long, cylindrical in shape and contain many sticky seeds.

The Bluebell creeper is well known in cultivation and is grown by both Australian plant enthusiasts and general gardeners. It is available in a number of forms including white and pink flowering forms. However, the common blue form remains the most popular. Although a climbing plant, B.heterophylla will grow with a shrubby habit to about 1 metre in height if there are no other plants in the vicinity. It is hardy in a range of soils and climates, will tolerate at least moderate frost and can withstand periods of dryness once established. Several websites indicate that the plant contains toxins that can cause skin irritation and nausea, however, these all seem to originate from the one source – see, for example, Eurobodalla Shire Council, (via the Internet Archive) and this problem has not been recorded or verified in most other publications.

Despite its popularity, care should be exercised before introducing this plant into gardens near natural bushland. It has become an environmental weed in many areas of south-eastern Australia. In South Australia, this species is a declared weed species that must be controlled – it is banned from sale in that State (for further information see this Declared Plant Policy).

There is a supposedly ‘non-invasive’ hybrid on the market called “Edna Walling Blue Bells” – the parentage claimed to be Sollya heterophylla x S.parviflora (under currently accepted taxonomy, that would be Billardiera heterophylla x B.drummondii). Reports indicate that it does not produce viable seeds but whether this is the case in all districts in unclear.

B.heterophylla can be grown from seed but cuttings strike readily and this is the preferred method of propagation. 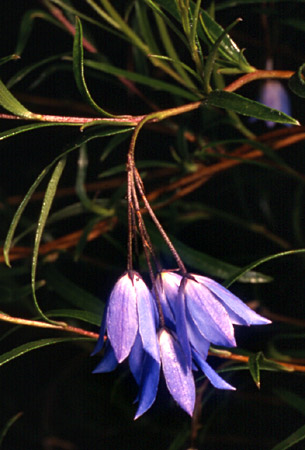 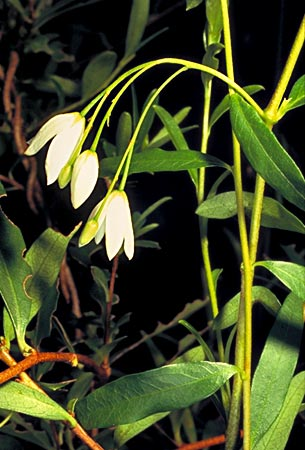