The genus Boronia is one of the best known of all Australian plants. There are approximately 95 species, all but one of which occur only in Australia. The majority of species are found in south-western Australia.

Boronia microphylla is a species from eastern Australia. It occurs over a fairly area range but only extends as far west as the Great Dividing Range. It is a small shrub of up to 1 metre in height and is usually found in moist, protected areas.

The flowers are 4-petalled of a star-like appearance similar to a number of other species found in the same general areas (eg.B.pinnata, B.thujona, B.florabunda) and are deep pink in colour. They are about 10mm in diameter and appear in spring. Like the species mentioned, the foliage of B.microphylla is pinnate (compound leaves made up of a number of leaflets) but is distinguished by its small leaflets which are less than 1cm long.

B.microphylla has been in cultivation for many years and is a very desirable garden plant. Although it has proven to be easier to maintain than many other members of the genus, it cannot be regarded as an easy plant for the non-enthusiast. It requires a well drained, protected position and an assured supply of water.

In common with most members of the Rutaceae, propagation of B.microphylla from seed is difficult but cuttings usually strike readily from current season’s growth. 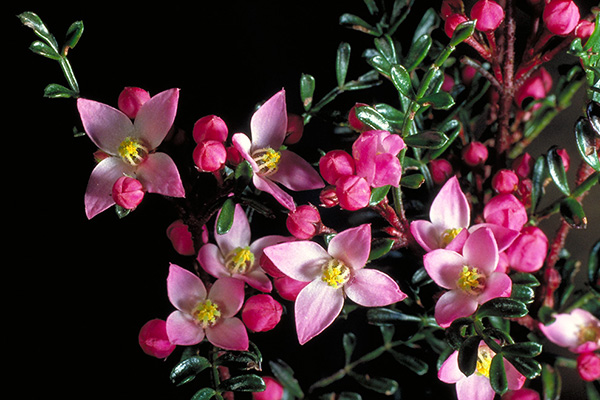