Brachyscome is a genus of about 90 – 100 species, most of which occur only in Australia. Some species are also found in New Zealand and two occur in Papua. They are found in all mainland states but most occur in the east of the continent. They are generally annual or perennial herbs bearing typical “daisy”-type flowers. Contrary to popular belief, a daisy “flower” is not a single flower but a cluster of small flowers surrounded by petal-like ray florets.

There is some disagreement regarding the correct spelling of the generic name; some botanists omit the letter “s”.

B.formosa was previously regarded as a form of B.melanocarpa and has been given the commercial name of “Pilliga Posy” or “Pilliga form”. As these names suggest, the plant occurs naturally in the Pilliga area of New South Wales, south of Narrabri. It is a small plant with a suckering habit. Leaves are green (often tinged purple), around 25 mm long with slightly lobed margins. The flowers are large for the genus, about 25 mm diameter and bright, rosy-pink in colour with a yellow central cluster of small flowers. Flowering occurs in spring and summer.

This species has become very popular in cultivation because of its bright flowers and suckering habit. It grows best in full sun or semi-shade in well drained soils with assured moisture. In dry conditions is may die back to the roots but it will usually reappear once regular rainfall returns. The species also makes an excellent container plant and is worth growing in a hanging basket.

Brachyscomes, generally, can be grown from either seed or cuttings but, in this case, cuttings are probably more practical as seed is rarely available. Cuttings strike very readily and established plants may also be divided to form new plants. 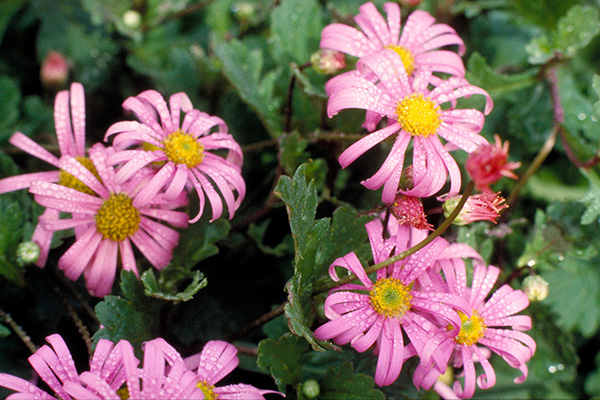