Caladenia is a genus of about 80 species of terrestrial orchids most of which occur only in Australia. Some are know as “spider orchids” because of the very narrow sepals and petals.

Caladenia flava is a very distinctive species because of its bright yellow flowers which often have crimson spots. It has a broad, hairy basal leaf up to 25 cm long. The 30-40 mm diameter flowers are often solitary but up to four flowers may be borne on a slender stem about 30 cm high. Flowering occurs in spring and the plants become dormant in summer when they die back to an underground tuber.

Like most terrestrial orchids, C.flava has fairly specialised cultural needs and is cultivated mainly by orchid enthusiasts. Generally the plants are grown in pots in a freely draining, sandy mix. They require good air circulation in a protected position of about 50% sun during the growing period from autumn to spring. During this growing period the plants must not be allowed to dry out. After the leaves have turned brown in late spring to early summer the pots are allowed to dry out completely. Repotting of tubers can be carried out in summer. 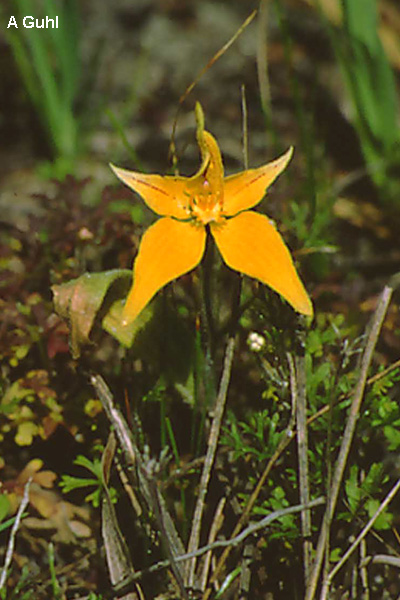