There is ongoing controversy about whether Melaleuca or Callistemon should be used for the bottlebrush species – see footnote box). Some herbaria have now adopted the name Melaleuca linearis to include this species as well as Callistemon pinifolius and Callistemon rigidus, however, this reclassification has not been adopted in the Australian Plant Census (which is accepted by ANPSA as the authority on Australian Plant nomenclature).

Callistemon linearis is a small to medium sized shrub from about 1 – 3 metres high. It has very narrow leaves up to 100-120 mm long, with a rigid point. In general appearance, it has some similarity to C.pinifolius (both species having narrow leaves), although the flowers of the latter are usually pale green (and only occasionally red) in contrast with the deep red of C.linearis. The geographical range of both species overlaps.

C.linearis has been cultivated for many years but is not especially common in gardens. Like C.pinifolius, it seems more resistant to attacks by sawfly larvae than the broader leafed species. The plant responds to annual fertilising after flowering and may be pruned severely if necessary. Many callistemons can tolerate less than perfect drainage but usually perform best in gardens with reasonable drainage and regular availability of water. 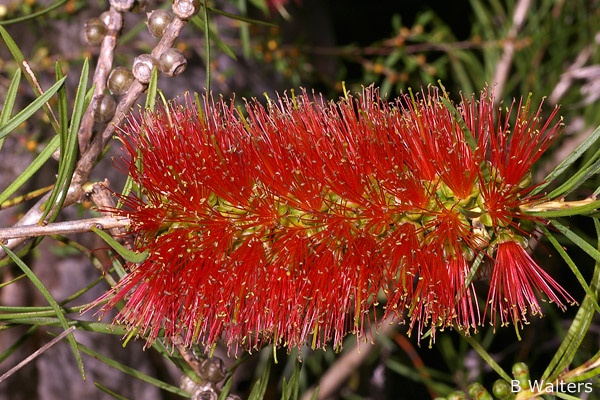