Callistemon “Old Duninald” was raised by Sid Reynolds at his property “Old Duninald” near Paterson in New South Wales. It arose as a chance seedling and is of uncertain parentage. To date this cultivar has not been widely available. The plant shown was photographed at the Mount Annan Botanic Garden, Campbelltown, New South Wales.

The cultivar appears to be a free flowering plant growing to around 2 metres in height by a similar spread. The typical bottlebrush flowers are an attractive orange-red with yellow tipped stamens. Flowering occurs in late spring to early summer.

Many Callistemons can tolerate less than perfect drainage but usually perform best in gardens with reasonable drainage and regular availability of water. Callistemons respond to well to annual fertilising after flowering and are not as sensitive as some other Australian plants to phosphorus. 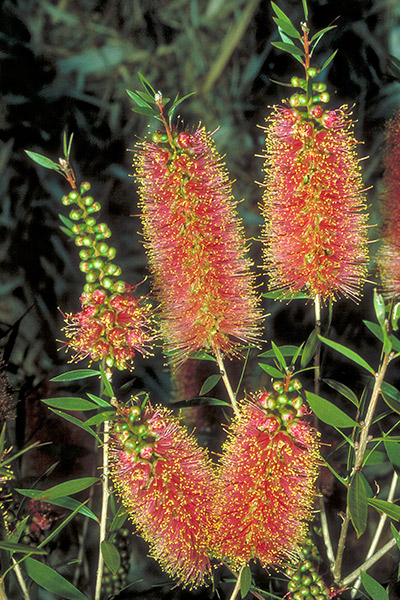