There is ongoing controversy about whether Melaleuca or Callistemon should be used for the bottlebrush species – see footnote box). Some herbaria have now adopted the name Melaleuca linearis to include this species as well as Callistemon linearis and Callistemon rigidus, however, this reclassification has not been adopted in the Australian Plant Census (which is accepted by ANPSA as the authority on Australian Plant nomenclature).

Callistemon pinifolius is usually an an easily identified species because of its very narrow leaves, which are quite distinctive in comparison to the broader foliage of most other members of the genus.

This species is a small to medium shrub rarely exceeding 1.5 metres in height. The brushes are usually green in colour but red flowered forms are sometimes seen in the wild and may appear in cultivation as chance seedlings. Flowering occurs in spring. C.pinifolius has some similarity with C.linearis (which has red flowers and slightly wider leaves) and sometimes occurs in the same locations as that species.

C.pinifolius is reasonably common in cultivation and seems more resistant to attacks by sawfly larvae than the broader leafed species. The plant responds to annual fertilising after flowering and may be pruned severely if necessary. Many callistemons can tolerate less than perfect drainage but usually perform best in gardens with reasonable drainage and regular availability of water. 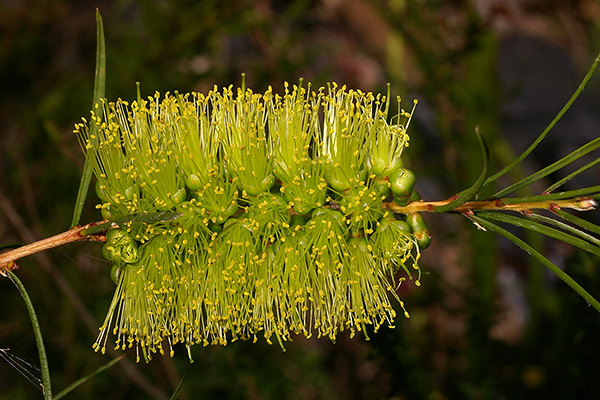 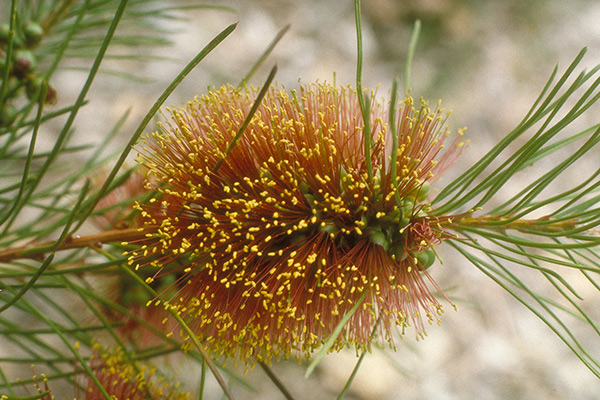