There is ongoing controversy about whether Melaleuca or Callistemon should be used for the bottlebrush species – see footnote box). Some herbaria have now adopted the name Melaleuca pityoides for this species, however, this reclassification has not been adopted in the Australian Plant Census (which is accepted by ANPSA as the authority on Australian Plant nomenclature).

The taxonomy of Callistemon pityoides is a little confusing in other ways as well. The species had been commonly known as C.sieberi but research has shown that the latter name should actually be applied to the plant previously known as C.paludosus. This has necessitated a new name for the former C.sieberi and C.pityoides (which had been used for that plant in the past) has been reinstated.

This species is common in alpine and sub-alpine areas which it is often found in marshy conditions. It is a variable shrub with forms from higher altitudes being compact in habit to about 1 metre in height. At lower altitudes it can reach 3 metres. Leaves are narrow with a sharp point and up to 35 mm long. The brushes, which appear in late spring and summer, are lemon-yellow, about 100 mm long by about 25 mm diameter.

This is an excellent species for cultivation in cold climates and it is commonly grown in England. Forms from the higher altitudes may, however, not flower well at lower elevation. The plant performs best in medium to heavy soils and can tolerate less than perfect drainage. It responds to annual fertilising after flowering.

Propagation of C.pityoides is easy from both seed and cuttings. 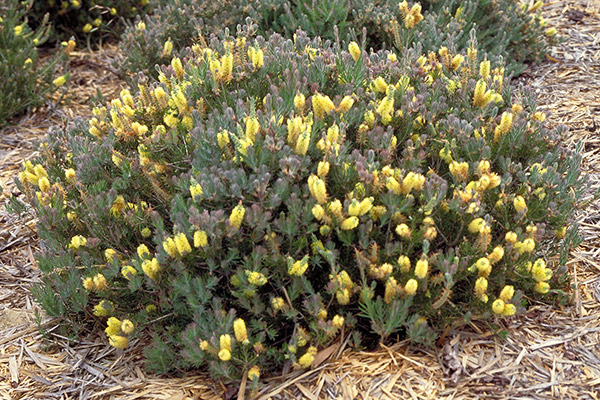