The genus was named by Jacques Labillardiere in 1806 when he published the description for C.sanguineus.

Several members of the genus are called “claw-flowers” because of the claw-like shape of the stamen bundles. The name ‘net bush’ is also used for some species because the long stamens on the one-sided flower clusters resemble a net but this name is not officially recognized. C.hirsutus has no official common name so we have dubbed it hairy claw flower.

C.hirsutus was not described until 1984 and for a long time was sold in nurseries as C.vilosus. It is easily recognised by the prominent hairs on the leaves which gives the plant an attractive, smokey appearance. It is a fairly slow-growing plant that is often less than a metre high. It forms a compact, multi-branched spreading shrub. The flowers are in a minority group in the genus in that they have five claws. They are bright red but often held within the foliage and appear from spring to summer. They contain nectar and are attractive to honey eating birds. The curvature of the flower nicely matches that of the bird’s beak so the pollen is deposited on the birds head. Flowers are followed by large woody seed capsules which retain the seed for many years. The older stems thicken and are often corky. It will tolerate extended dry periods once established. 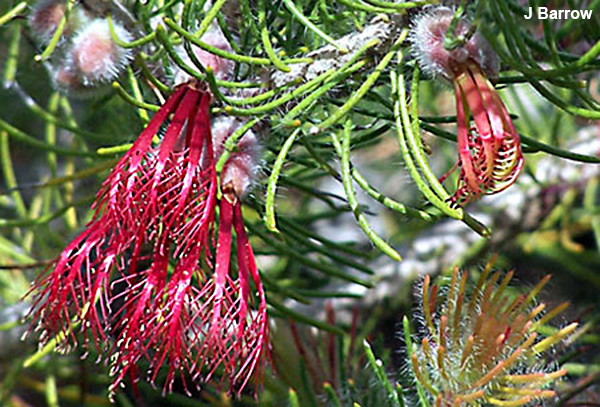