Commelina is a genus of about 230 species with about 7 occurring in Australia.

Commelina cyanea has been called “scurvy weed” as it was used by early European settlers to avoid or alleviate scurvy. It is a weak trailing perennial herb, generally prostrate or nearly so, with fleshy stems growing up to 1-2 metres in length. It superficially resembles the common introduced weed, Trad (Trandescantia fluminensis; syn T.albiflora), but differs in that the lance-shaped (lanceolate) leaves are narrower and it has bright blue (rather than white) flowers occurring over the summer and early autumn period. Scurvy weed tends to grow rapidly in warm and/or wet weather and die back in the cooler, dryer months.

Scurvy weed is a very versatile and hardy plant for the home garden; its blue flowers are distinctive and attract native bees. It can be grown in a wide range of conditions, but prefers those similar to its natural habitat (forests), such as half shade to full sun. It likes moisture and prefers heavier moisture-retentive soils. It will regenerate spontaneously from old plant material, such as stems, nodes or seeds and may colonise bare ground quite readily. On occasions, it can become weedy and smother small plants if not watched closely. However, in other cases its appearance in summer is a welcome and colourful addition to the garden

The species is easily grown from cuttings and will probably germinate from seed readily. 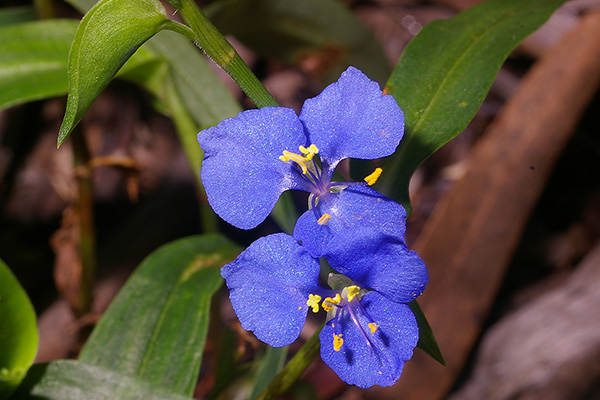