Conospermum is a genus of about 50 species, all of which occur only in Australia. Most are found in the south of Western Australia but a few can be found in the eastern states. They are generally called “smokebushes” because, with some species, the appearance of the flowering plant from a distance resembles puffs of smoke. Very few are found in cultivation.

Conospermum incurvum is one of the western species and it forms a spreading shrub up to 1.5 metres high. The leaves are linear and rounded in cross-section (terete) to about 25 mm long. The small, greyish-white flowers occur in late spring in clusters about 250 mm long at the ends of the branches.

Plume smoke bush is one of the best of the smokebushes and natural stands have been exploited for the cut flower industry. It is a species that would benefit greatly from commercial cultivation but difficulties in propagation and lack of knowledge of cultivation requirements have prevented this to date. It is believed that the species would prefer light, well drained soils in sun or semi shade.

Although some success has been achieved in seed propagation, germination can be very unreliable and damping off of seedlings is common. Cuttings of firm, current season’s growth are reported to strike reasonably well but good cutting material is difficult to obtain. 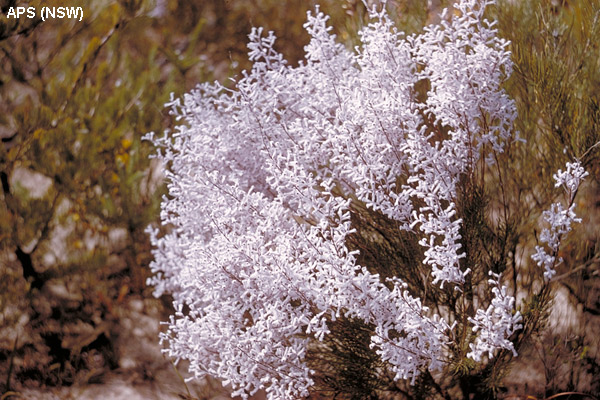