Correa ‘Dusky Bells’ is believed to be a hybrid of Correa reflexa and C.pulchella.

Correa ‘Dusky Bells’ is a small shrub which may reach about 1 metre in height by a similar width but is usually less. The leaves are oval to elliptical in shape up to 30 mm x 15 mm wide and dull green in colour. The carmine-pink flowers are bell-shaped and about 25-35 mm long. The bells are comprised of 4 petals fused together into a tube. Flowering occurs in winter and spring.

This cultivar has proven to be reasonably hardy under cultivation, particularly in moist, well drained soils. It will tolerate full sun but is at its best with some protection. It is also tolerant of at least moderate frosts. In common with most correas, C. ‘Dusky Bells’ is attractive to honey eating birds.

Propagation is difficult from seed but, in any event, seed should be avoided as it is unlikely to produce plants identical to the parent. Propagation from cuttings usually presents no difficulty. 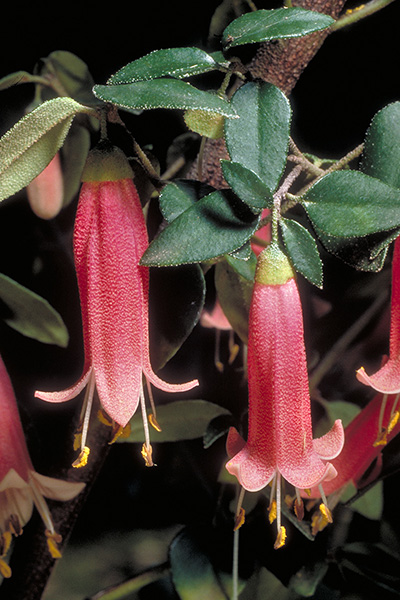