Correa lawrenceana is a small to medium shrub which may reach 3 metres in height. There are six recognised botanical varieties: var.lawrenceana, var.cordifolia, var.genoensis, var.glandulifera, var.macrocalyx and var.rosea. These differ in details of foliage, flower colour and characteristics and nature of oil glands on stems and leaves.

The leaves are typically leathery and roughly oval to heart-shaped up to 75mm long. The cream, green or red flowers are narrow, bell-shaped and about 20-30 mm long. The bells are comprised of 4 petals fused together into a tube. There are 8 stamens which extend beyond the end of the bell. Flowering occurs from autumn through to late spring.

C.lawrenceana has proven to be reasonably hardy under cultivation, particularly in moist, well drained soils in a protected position. Once established, the plant will tolerate extended dry periods. Although not a spectacular in flower as some other correas, the interesting foliage make this species an excellent landscaping plant.

Most Correas are attractive to honey eating birds and C.lawrenceana is no exception.

Propagation is difficult from seed but usually presents no difficulty from cuttings. 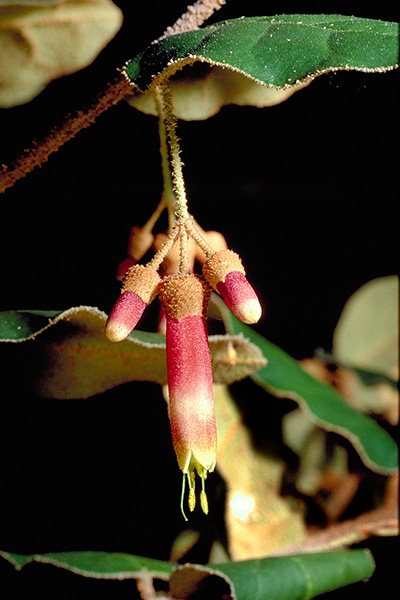