Corybas is a genus of about 100 species of terrestrial orchids of which about 20 occur in Australia. Recent taxonomic revision of terrestrial orchid species has resulted in the reclassification of many species into different genera. Corybas fimbriata is now recognised as Corysanthes fimbriata by some authorities but the change has not met with universal approval. The name Corybas fimbriatus is still regarded as the valid name in the Australian Plant Census.

Corybas species are very distinctive orchids because of their relatively large, purplish-red “helmet-shaped” flowers. Corybas fimbriatus has a single basal leaf which is oval in shape up to 25 mm long. The 25-30 mm diameter flowers occur singly and are seen in late autumn and winter. The plants become dormant in summer when they die back to an underground tuber.

Although C.fimbriatus is more easily grown than many other terrestrial orchids, it is cultivated mainly by orchid enthusiasts. Generally the plants are grown in pots in a freely draining, sandy mix. They require good air circulation in a protected position of about 50% sun during the active growing period after flowering. In cultivation, the flowers may abort before fully opening if there is insufficient humidity in the growing environment. When the plants become dormant in summer, repotting of tubers can be carried out. 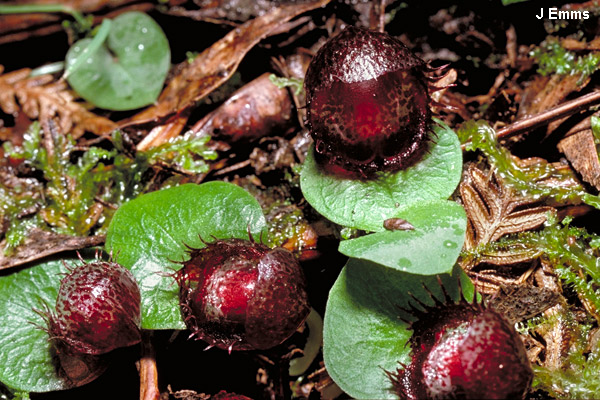