Corymbia calophylla is one of around 80 eucalypts which were transferred in 1995 from the genus Eucalyptus to the newly created genus Corymbia. The species was formerly known as Eucalyptus calophylla and that name is still preferred by some.

Marri is usually a large tree to 40 metres but can take mallee form on poor sites. It bursts into prominent cream flowers, held outside the canopy, in mid-summer – despite this being in the middle of a rainless period in the mediterranean climate of its native habitat. The bark is rough (tessellated), brown to grey-brown, and often has exudations of reddish gum (kino). Its common name “Marri” is from the Nyoongar word for blood – applying to the gum.

Marri occurs in a range of habitats. It is an important component of both the Jarrah and Karri forests of Western Australia. It also occurs on the coastal plain on a range of soils.

The nuts are large and carry rather large seeds that provide an important food source for some species of parrots including cockatoos. They are commonly called “Honkey nuts” in Western Australia – allegedly a corruption of hockey nuts because of their use in a game.

Marri is superficially similar to Corymbia ficifolia. It differs in that it has urn-shaped fruit rather than barrel shaped, its seeds are larger and do not have wings, and its oil glands in the leaves are prominent. It crosses readily with Corymbia ficifolia. The hybrids are intermediate in these characters and often set fewer nuts. Pink-flowering hybrids occur but there is also a rare form of true Marri which is also pink flowered.

The timber is honey-coloured. It has numerous faults and gum veins. Consequently it has poor strength and is not used for construction purposes. Recently the character of the timber is being appreciated and it is increasingly used in fine furniture. The light colour of the wood makes it suitable for pulp manufacture and large quantities are now being used for chipping.

Marri is a large tree. It is not suitable for most gardens or street plantings but it is an excellent tree for paddock plantings providing shade for animals. In forest habitats its side branching is restricted but in parkland settings it forms a rounded tree providing excellent shade. The large nuts are somewhat of a hazard if grass under the trees is mown. The appearance of the tree is characteristic because it tends to repeatedly branch into two, more-or-less equal branches. 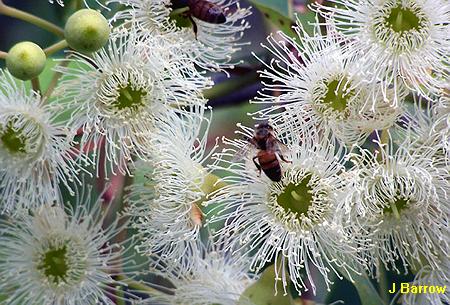