Dampiera is a genus of 60-70 species, all of which occur only in Australia. They are generally small herbs or shrubs having blue to purple flowers with a yellow centre. Only a few species are seen in cultivation, the most widely available being D.diversifolia, a Western Australian species which has become well established in the nursery trade.

Dampiera stricta is a small, suckering species. It usually grows up to 300 mm high and may spread to a metre or more across. The leaves are a narrow elliptical in shape but are variable and may be from 10 to 60 mm long. The blue or mauve flowers are seen from autumn through to summer but are most prominent in spring. They are about 20-25mm diameter with a yellow centre. A similar species, D.sylvestris, has been confused with D.stricta.

There are a number of forms of D.stricta in cultivation. It seems to be hardy in a range of climates, prefering well drained soils in full sun or partial shade. Once established it will tolerate at least moderate frosts and appears to have few problems with insect pests. The suckering habit of the species is never invasive. It grows well in a container and may be combined with larger plants in the one pot.

Propagation from seed is unreliable but cuttings taken from the suckering stems usually strike reliably. 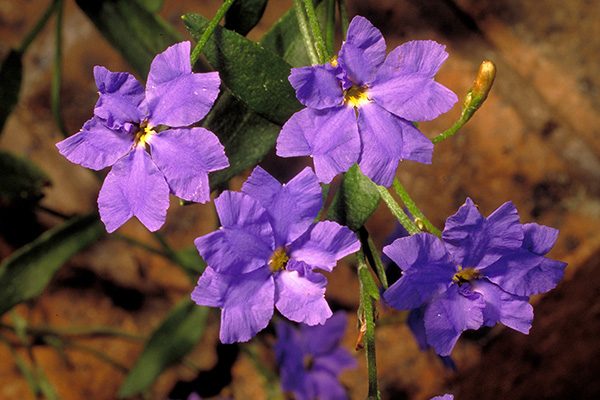