The genus Daviesia consists of around 200 species, all of which are Australian endemics. They can be found in most states but mainly in the south-west of Western Australia. All are small to large shrubs.

Daviesia ulicifolia is a small to medium shrub to about 2 metres high. The leaves are elliptical or oval shaped between 5 and 20 mm long by 0.5 to 5 mm wide with a very sharp point (pungent) and are at right angles to the stems. Like some other species, the leaves could be described as flattened stems (phyllodes), similar to many acacias. The flowers have the typical “pea” shape consisting of 4 petals; the “standard”, the “keel” and two “wings”, as shown in the diagram. The flowers are yellow with reddish/brown markings and occur either singly or in clusters from the leaf axils. Flowering generally occurs in late winter to early summer and flowers are followed by small, triangular seed pods.

D.ulicifolia is a variable species with several subspecies recognised. Further details can be found at the Sydney Royal Botanic Garden’s Plantnet site.

Daviesias are sometimes grown by enthusiats but the genus is not in widespread cultivation. This is a pity as there are a number of species that would make excellent subjects for cultivation. Whether D.ulicifolia is one of these is debatable as many people would possibly not appreciate its very prickly habit. However, this is likely to be beneficial to small birds as a refuge from predators. The plant is very colourful when in flower. Plants require a well drained soil in a sunny or partly shaded position.

Propagation is easy from seed following pre-treatment to break the physical dormancy provided by the impervious seed coat. Pre-treatment can be carried out by abrasion or by the use of boiling water (further details can be found in under the “Propagation” tab of the “Pea Family” page). The seed retains viability for many years. Cuttings may be successful but are often slow to strike and may not produce a vigorous root system. 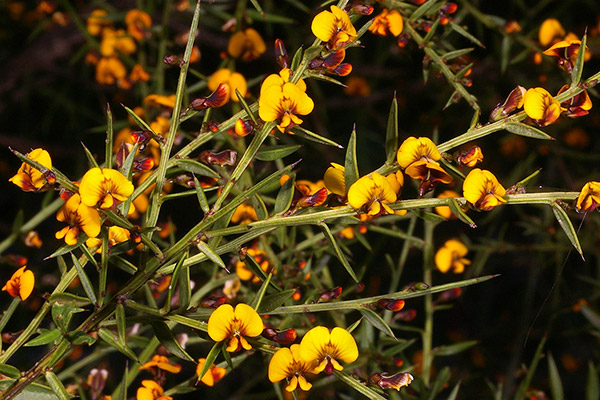