Dockrillia is a genus of 28 species formerly classified under the genus Dendrobium. Major taxonomic revision of the Dendrobium group has occurred in recent years with many species being transferred to new genera. Some of these changes have been reasonably widely accepted while the status of other changes is less certain. The adoption of the generic name Dockrillia for the “terete-leaved” Dendrobium species seems to be more generally accepted than some of the other changes and has been adopted in these pages.

Dockrilla linguiformis (formerly known as Dendrobium linguiforme) has the distinction of being the first Australian orchid to be botanically described. It occurs as either an epiphyte (growing on trees) or a lithophyte (growing on rocks). It is a very distinctive species because of its thick, fleshy leaves which are oval-shaped and up to 40mm long. The 10mm diameter flowers occur in racemes of up to 20 white flowers, usually in late winter and spring. In good conditions, this orchid can form large mats on rock faces even in very exposed locations. The fleshy leaves act as water storages and, during extended dry periods they may shrivel noticeably.

This species is well known in cultivation and is easily grown in temperate to tropical areas. It can be established on trees in the open garden or may be grown in pots or attached to bark or cork slabs, preferably in a situation having good light. When grown in pots a very freely draining mix is required such as pine bark chips. Fertilising with a liquid fertiliser after flowering is beneficial.

Plants are usually propagated by division of larger clumps. 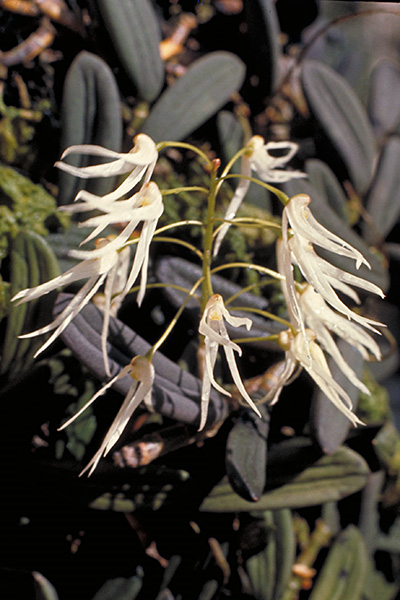