Eremophila racemosa is a species with a very restricted natural occurrence north of Ravensthorpe in south Western Australia. Its survival is regarded as being seriously threatened due to land clearance for agriculture although proliferation of the species after bushfires has been reported. The species is an erect shrub usually less than one metre in height with oblong leaves to about 50 mm long. Flowers occur in the leaf axils and are tubular in shape to about 15 mm long. Flower colour is usually reddish purple although a yellow form is known. Flowering occurs mainly in spring but some flowers may also be seen at other times. Fruits consist of four chambers each containing a single seed.

Despite its restricted natural occurrence, E.racemosa is reasonably well known in cultivation both in Australia and overseas (particularly California). It is best suited to dry climates and may be short lived in more humid areas. The species requires well drained soils in full sun and, once established, the plant tolerates extended dry periods. It is also tolerant of at least moderate frost. 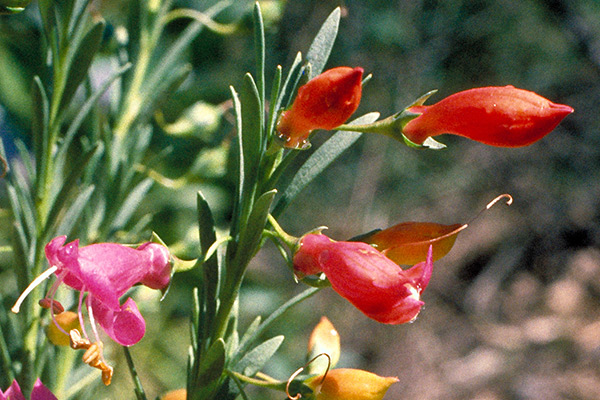