The genus Eriostemon consists of two species, E.australasius and E.banksii. The latter, which is found in Queensland, is sometimes regarded as being a sub-species of E.australasius. A number of other species formerly classified as Eriostemon have been re-classified into the genus Philotheca.

E.australasius is a small shrub usually less than 1 metre high but occasionally reaching 2 metres. It has a fairly stiff and upright habit of growth. The leaves are narrow , oblong in shape and 30-70 mm long by about 4-10 mm wide, greyish-green in colour. The waxy, pale to mid pink flowers are seen in the leaf axils from late winter through to late spring and are up to 40 mm in diameter. The flowers have narrow streaks of a darker pink than the base flower colour. Flowering is usually profuse and often spectacular.

The pink wax flower is a very desirable plant for the garden but results in cultivation are mixed. It is best grown in a semi shaded position in well drained sandy to sandy loam soils which are not allowed to dry out for extended periods. It will not tolerate waterlogged conditions but is tolerant of at least moderate frosts. If garden conditions are unsuitable, the plant can be successfully grown in a container using a quality potting mix designed for Australian native plants.

In common with most members of the Rutaceae, propagation of E.australasius from seed is difficult. Cuttings are also difficult to strike although a clone which strikes reasonably easily has recently been brought into cultivation and this form also seems to be hardier in the garden than other forms. 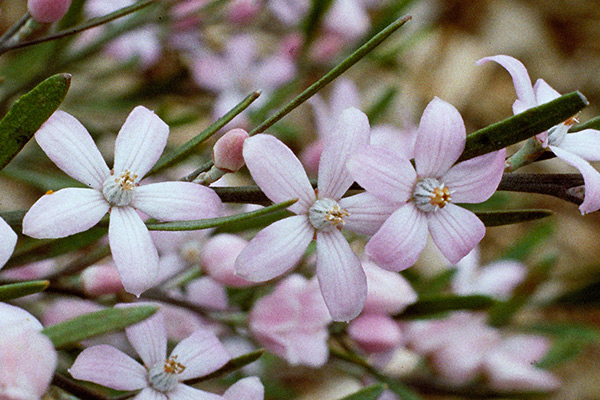