The river red gum is one of the best known of all eucalypts. It is common along the Murray-Darling river system and along watercourses in much of semi-arid Australia. It is a medium sized tree usually branching not far above the ground. It may reach 30 – 40 metres in height.

The bark is smooth and white or greyish in colour except near the base of the trunk where it is often rough. Leaves are “typical” of eucalypts being lance-shaped up to 250mm long and blue-grey. The white flowers are seen mainly in late spring and summer and these are followed by small seed capsules about 60 mm diameter with protruding valves.

The timber is termite resistant and is used in many applications where contact with the ground is needed.

An unusual form of E.camaldulensis occurs at Greenough on the Western Australian coast near Geraldton. The typical growth of this group of trees is for the trunk to grow more or less straight up for about two metres followed by a right-angled bend. It is apparently a response to the local environmental conditions but the habit appears to be genetically fixed.

Another famous specimen of E.camaldulensis is the famous ‘Cazneaux Tree’ in South Australia’s Flinders ranges. This tree was made famous by photographer Harold Cazneaux in 1937. He titled it ‘Spirit of Endurance’. 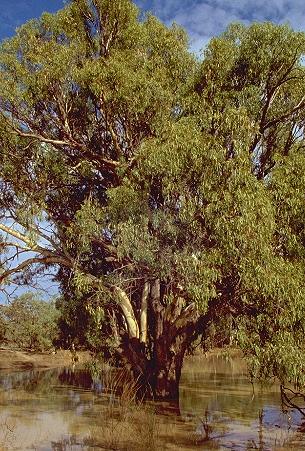 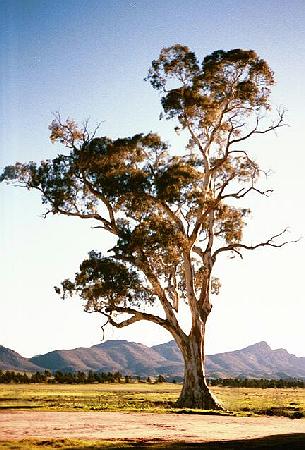 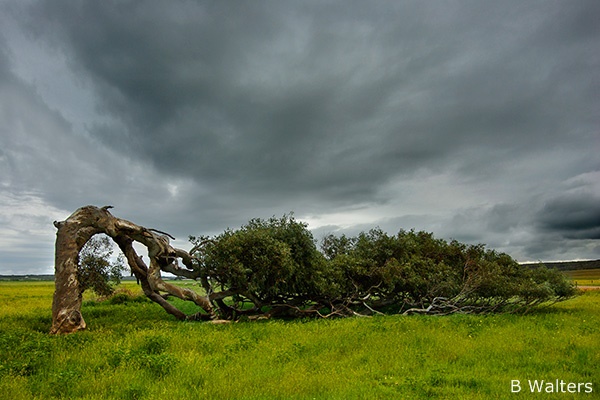