George Bentham in 1867 established a broad concept for the genus Baeckea but in recent years studies have shown that, because of differences in the group, many Baeckea species should be placed into other genera, including Ochrosperma, Triplarina, Babingtonia, Euryomyrtus, Kardomia, and Sannantha. In 2001, M.E. Trudgen reinstated and revised the genus Euryomyrtus which consists of 7 species – the revision reclassifies the species formerly known as Baeckea ramosissima as Euryomyrtus ramosissima. Further information on the taxonomy of the genus Baeckea and related plants can be found in the “Background” tab on the Geraldton Wax and Relatives page.

Euryomyrtus ramosissima is a small, often semi-prostrate shrub from 0.2 to 1 metres high by a similar width. It has linear to narrowly oval-shaped leaves 3-10 mm long by 1-3 mm wide. The small tea tree-like flowers are 5-10 mm in diameter, white to deep pink in colour. Flowering occurs from late winter to early summer.

A number of forms of this species are in cultivation – the most commonly grown form being a small, semi-prostrate plant with pink flowers. It is an excellent species for a rockery and may self layer by forming roots at the leave nodes. It must have well drained soils and prefers a position in full sun or semi shade. It is tolerant of at least moderate frosts and responds to pruning to maintain a bushy habit.

Propagation from seed is reliable but seed is often difficult to obtain. The plant strikes readily from cuttings of firm, current season’s growth. 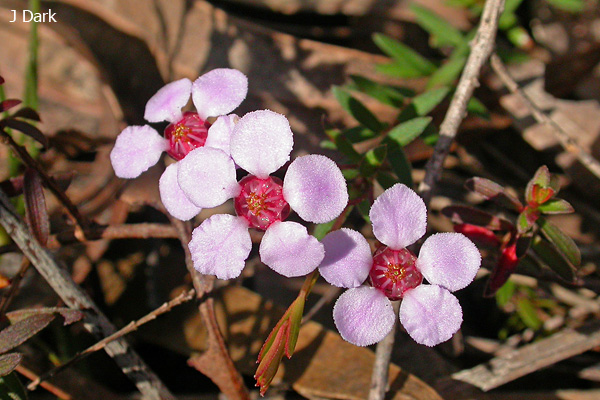