Goodenia is a genus of about 200 species, almost all of which are confined to Australia although a few occur in the islands to the north. The genus gives its name to the Goodeniaceae family which includes several other well known genera including Lechenaultia, Dampiera and Scaevola. With a few exceptions goodenias, generally, are not widely cultivated despite the fact that most are small shrubs or herbs with colourful flowers and well suited to smaller gardens.

Goodenia calcarata is a small, annual herb to 0.5 metres high. The leaves are obovate to oblong in shape to about 50 mm long by 30 mm wide with toothed margins. The cream flowers are streaked with brown or purple markings and are seen from winter to summer in good seasons. The flowers occur in the leaf axils.

This species is not seen in cultivation and it would probably be best suited to drier areas. The lack of availability of propagating material limits its potential for wider cultivation but it would be worth trying as an annual in wetter climates as its flowers are attractive and unusual. It would require soils with good drainage and a sunny position.

Based on experience with other Goodenia species, cuttings should strike readily and seed should geminate without pretreatment. 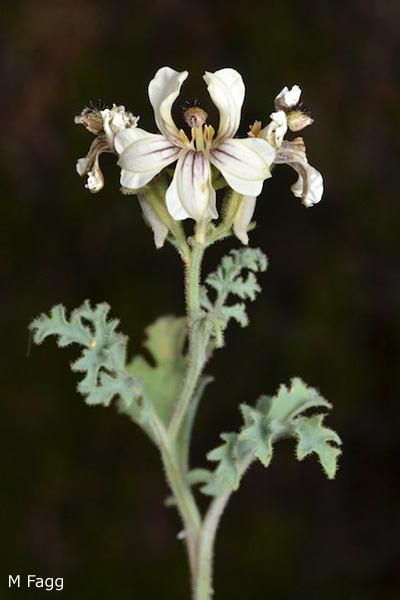