Grevillea “Coconut Ice” is a medium shrub which can reach about 2 metres in height by 2 metres wide. Large pink and red racemes of flowers appear throughout the year. This cultivar was raised by the late Merv Hodge (but not named by him) and has the white flowered form of G.banksii as one parent and G.pinnatifida as the other. The name has lead to some confusion with other hybrids such as G.’Misty Pink’ as many people expect G. ‘Coconut Ice’ to be pink and white, which it isn’t.

All of the “Robyn Gordon” group of cultivars are bushy shrubs with attractive lobed foliage. The older cultivars (“Robyn Gordon”, “Superb”, “Ned Kelly” and “Coconut Ice”) have proven to be reliable in a wide range of climates and soils and there is every reason to expect the newer forms to be equally hardy. Pruning is usually not required but plants can tolerate moderate to heavy pruning if necessary. A sunny, well drained position is preferable in the garden and plants are tolerant of at least moderate frost. Fertilisers containing phosphorus are best avoided. The flowers attract honey-eating birds. 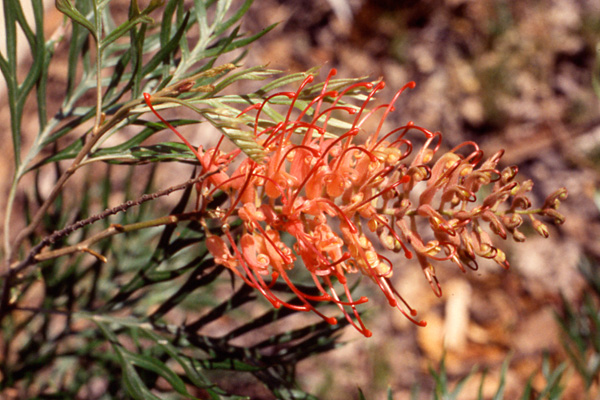