Grevillea fililoba is a member of the confusing G.thelemanniana group which includes a number of species which are similar to the non-botanical eye. G.fililoba has been known as G.thelemanniana sub-species fililoba and further debate about the status of the species may be expected.

Generally, Grevillea fililoba is a small shrub to about 1.5 metres in height. The narrow leaves are up to 45 mm long and are divided into narrow segments. The flowers occur in clusters in loose racemes at the ends of branches and are seen in winter and spring. The flower colour is bright red with a cream or yellow end to the style.

G.fililoba has been in cultivation for many years, often as Grevillea “Ellendale” or “Ellendale Pool”. The species has proven to be reasonably hardy in a range of conditions but can be short lived in humid areas of summer rainfall (which is often fatal to plants from Western Australia). It is best grown in well drained soils in full sun. The species tolerates at least moderate frost and fertilisers containing phosphorus are best avoided.

The species can be grown from seed and cuttings strike fairly readily. 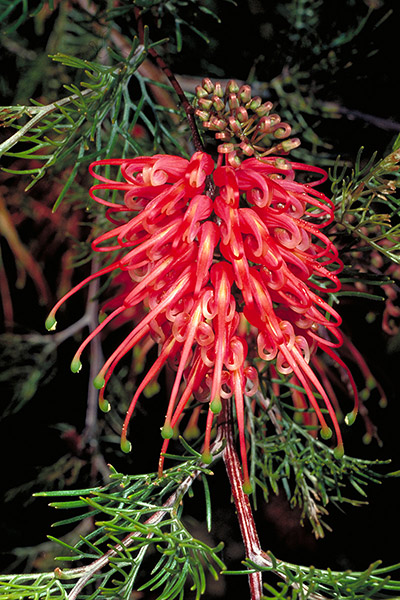