Grevillea “Honey Gem” is one of a number of large, free-flowering hybrids that have appeared over the last decade. Loosely termed “Queensland” hybrids because all have at least one species native to Queensland in their parentage, most of these plants are characterised by a tall habit, ferny leaves and large racemes of colourful flowers which appear over a long period. Other popular cultivars in this group include G.”Misty Pink” (pink and cream), G.”Sandra Gordon” (yellow), G.”Moonlight” (cream) and G.”Sylvia” (bright pink).

Grevillea “Honey Gem” is believed to be a hybrid between G.pteridifolia and G.banksii, both native to Queensland. It grows to about 4 metres in height by 3 metres wide and has an open habit. The large, golden-yellow racemes of flowers are around 150mm in length and can be seen at most times of the year, with a flush in late winter/spring. The flowers attract honey-eating birds

This cultivar is quick growing and may be severely pruned (almost to ground level) if it becomes untidy. A sunny, well drained position is preferable in the garden and plants are tolerant of at least moderate frost. Fertilisers containing phosphorus are best avoided.

Although G.”Honey Gem” produces viable seed, this will not come true to type. Propagation is fairly easy from cuttings. 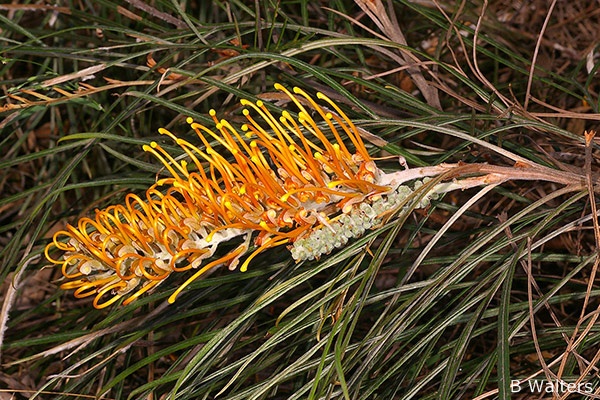