Grevillea lavandulacea is a variable species with a number of distinct horticultural forms in cultivation, mostly known for their geographic origin. The form from the Tanunda area in South Australia is one of the most popular. It is a low spreading shrub to 0.3 metres high by 1 metre spread with brilliant red “spider” flowers. Other forms sometimes seen include “Penola” and “Victor Harbour” (both from South Australia) and “Billywing” and “Black Range” (both from western Victoria). The differences between the forms may include flower and foliage colour and plant growth habit. All forms are small shrubs, rarely exceeding 1 metre in height.

Some botanists recognise two botanical varieties. The type, var.lavandulacea, occurs across the whole range of the species while var.sericea is restricted to western Victoria. It differs from the type in having narrow leaves with silky hairs.

G.lavandulacea is popular in cultivation but performs best in drier climates without excessive summer humidity. It prefers a sunny position but will tolerate some light shade. Plants are tolerant of at least moderate frost. Fertilisers containing phosphorus are best avoided.

The species can be grown from seed but distinct forms need to be propagated from cuttings which strike fairly readily. 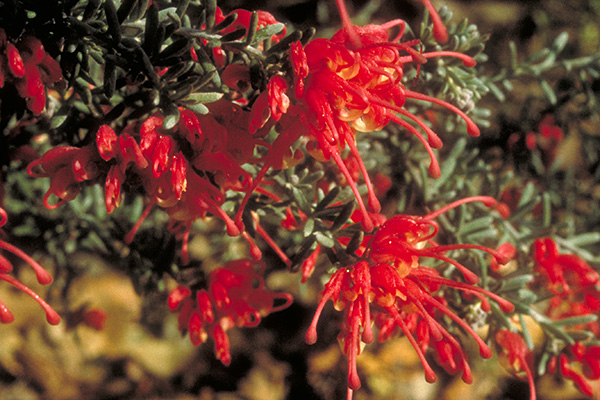