Grevillea leptobotrys is a very unusual species, certainly not what most people would regard as a ‘typical’ grevillea. The species is usually a low, spreading shrub ranging from completely prostrate to about 0.5 metres spreading up to 3 metres across. The leaves are up to 180 mm long and usually divided into segments and with prominent stalks. The tips of the leaflets have a small, pungent point. The pink flowers occur in racemes at the ends of the branches and in the upper axils and usually occur from spring through to mid summer.

There is some confusion regarding Grevillea leptobotrys in the horticultural trade. For many years it was sold under the name G.flexuosa, a separate species which is not common in cultivation. G.leptobotrys is a very desirable garden plant because of its attractive foliage, flowers and growth habit. However, it has not been particularly successful even in dry summer climates which would be expected to suit it. In more humid areas it rarely survives more than a few seasons. For any sort of success, well drained soils in a semi-shaded situations are required. Some success has been achieved by growing the plant on a container. For long term cultivation, grafting onto a hardy rootstock (such as G.robusta) is required.

Propagation can be carried out from cuttings of firm, current seasons growth which strike reasonably reliably. Seed may be successful but is not readily available. 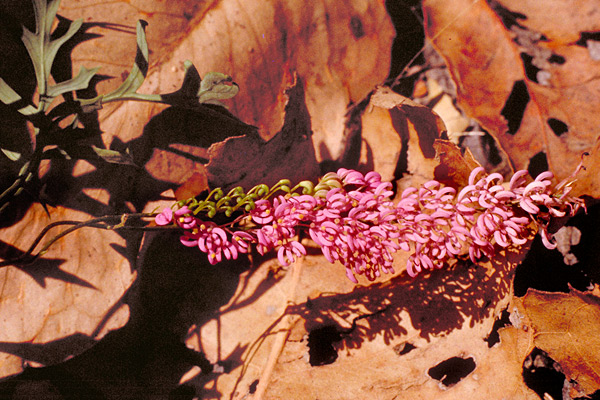