The type specimen of Grevillea maccutcheonii was collected in 1993 but other specimens were apparently collected prior to this. The species is known only from a single location near Busselton in Western Australia and comprises only a very small number of mature plants. Western Australia’s Botanic Gardens and Parks Authority has propagated plants using material from the wild population and these have been translocated into areas near the natural population.

Further details on the conservation of this species can be found on the Australian Government’s Threatened species and ecological communities web site.

Grevillea maccutcheonii is a dense, spreading shrub to about 2 metres in height. The leaves are up to 30 mm in diameter and are three-lobed, with each lobe terminating in a pungent point. The ‘spider’ flower clusters appear in winter to spring and are conspicuous and terminal at the ends of branches. Individual flowers are greenish at the base with a bright red style.

Because of its rarity, G.maccutcheonii is in limited cultivation but early reports indicate that it adapts well to cultivation even in areas of high summer humidity (such as Sydney) where plants from the south west often struggle. It is an attractive, densely foliage plant which should become popular in native gardens. Although it occurs in seasonally waterlogged conditions in nature, moist, well drained conditions in full to part sun are likely to be preferred in cultivation. 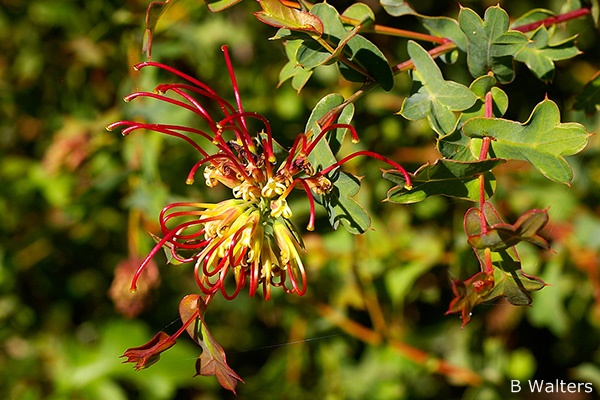