Grevillea rhyolitica is a recently named species which was previously included under Grevillea victoriae. It is a small to medium shrub to about 1.5-2 metres high. The dark green leaves (paler below) are elliptical and up to 80 mm long and 20 mm wide with conspicuous venation. The flowers occur in clusters from the leaf axils and have a pendulous habit. The clusters are deep pink to bright red and very conspicuous. Flowering occurs mainly from winter through to summer but flowers may be present at other times of the year.

Despite the restricted range of the species, there are two recognised subspecies (subsp. rhyolitica and subsp. semivestita) which have subtle differences in flower colour and habit. Subspecies semivestita has deeper red flowers and a very long flowering period.

Although a recent introduction to horticulture, G.rhyolitica is becoming well known in cultivation. The subspecies semivestita has been widely promoted under the name ‘Deua Flame’ and indications are that it is hardy in temperate climates in well drained soils and full sun to partial shade. It is likely to be tolerant of medium to heavy frost. Given its very long flowering period and moderate size, this form of G.rhyolitica is likely to become very popular in both native and general gardens. Like many grevilleas, the flowers are rich in nectar and attract honey-eating birds 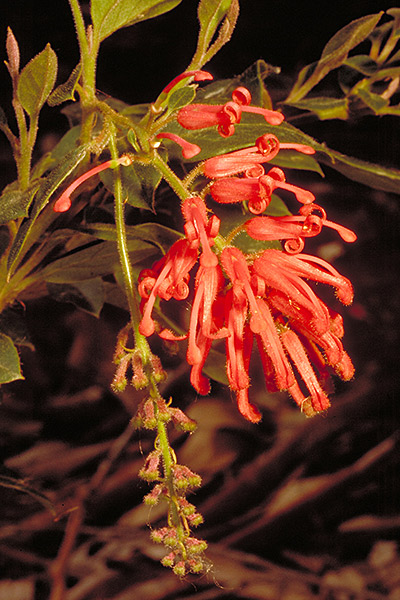