Grevillea rigida is a medium to large shrub from 2-3 metres high by up to 4 metres wide. Leaves are up to 60 mm long, divided into narrow lobes, rectangular in cross section and with a pungent point. Spectacular bright red flower clusters of “toothbrush” configuration occur at the ends of the branches in spring to autumn.

Two subspecies are recognised (subsp. rigida and subsp. distans) which differ mainly in the number and arrangement of lobes on the leaves.

Grevillea rigida is a relatively recently named species which was previously included under G.tetragonoloba.

This species has not been widely cultivated but is now becoming more readily available through specialist native plant nurseries. It is best suited to areas with a dry summer climate and it may prove more difficult in humid, wet summer districts such as coastal New South Wales and Queensland. In those areas grafting onto a hardy rootstock may be necessary for long term growth. It should be grown in a warm, sunny location in well drained soils. Like most grevilleas, the flowers attract honeyeating birds.

The species can be grown from seed which should be “nicked” with a sharp knife prior to sowing to improve germination. Cuttings from firm, current season’s growth can be slow to strike and success is improved by using a root promoting hormone. The species has been successfully grafted to hardy root stocks such as G.robusta and G.”Poorinda Royal Mantle”. 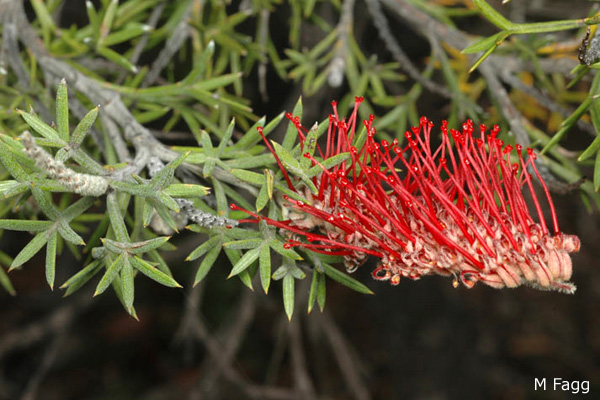