Guettarda is a reasonably large genus of over 100 species with a single representative, Guettarda speciosa, occurring in Australia. G.speciosa is a spreading shrub to about 4 metres. It has large green ovate leaves up to 23cm long and 18cm wide. Tubular flowers occur from October to May, though may be seen at other times, and are fragrant; to 3cm long and white in colour. The fragrance is similar to, though weaker than, the commonly grown exotic gardenia. Flowers are followed by small globular hard fruits to 2.5cm in diameter.

In nature, the beach gardenia grows on beach strand communities in coastal regions, almost all the way to the high tide level in places. Its requirements are similar in the garden – well drained sandy soil and an open sunny position. The fragrance and large interesting leaves make an interesting alternative to traditional gardenias for the subtropical or tropical gardener. Frost tolerance is unknown but the plant is unlikely to be tolerant to much, if any, frost – seedlings are frost sensitive.

Propagation is from seed which may take several months to germinate. 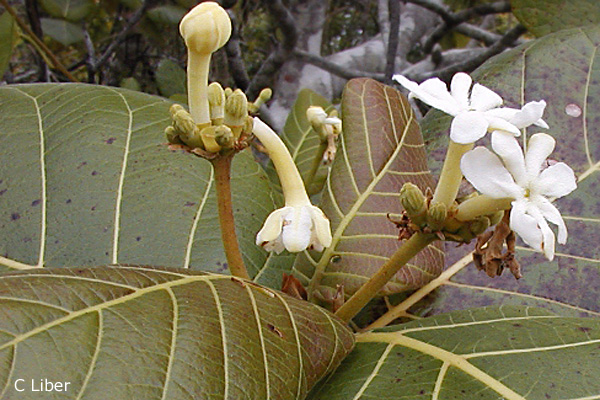