Hakea bakeriana is a small to medium sized shrub spreading to 1 or 2 metres high by the same in diameter. It has bright green narrow, pointed foliage which is less prickly than that of many other Hakea species. The flowers occur in loose clusters in the leaf axils and range from a pinkish white to deep pink in colour. They appear in late winter through to spring and are followed by very large, attractive woody seed pods about 80mm long by 45mm wide. Despite their size, the pods only contain 2 winged seeds, the usual number for all Hakea species. The pods do not shed the seed until stimulated to do so by environmental conditions (eg. after a bushfire).

This species has been grown by enthusiasts for many years and has proven itself to be hardy throughout a range of climates. In nature it grows on sandy well-drained soils but has been grown successfully in heavier ones, and is best grown in an open, sunny position. Hakea bakeriana may be slow growing and take some years to flower (though this would depend greatly on whether the plant was seed or cutting grown). As the flowers occur on old wood, they may be obscured by foliage and some pruning of newer branches maybe necessary to ensure good visibility.

Overall, Hakea bakeriana has many features (compact size, hardiness, attractive flowers and showy seed pods) which would make it a useful addition to small to medium sized gardens in sub tropical and temperate districts. However, due to its restricted distribution it has not been feasible to propagate the species in large numbers and, as a result, the species is not well known in general horticulture, being only rarely available in specialist nurseries.

Hakea bakeriana is easily grown from seed (which generally germinates in around two weeks but may take longer), but this is not readily available. The species can be grown from cuttings but these may not be particularly easy to strike. 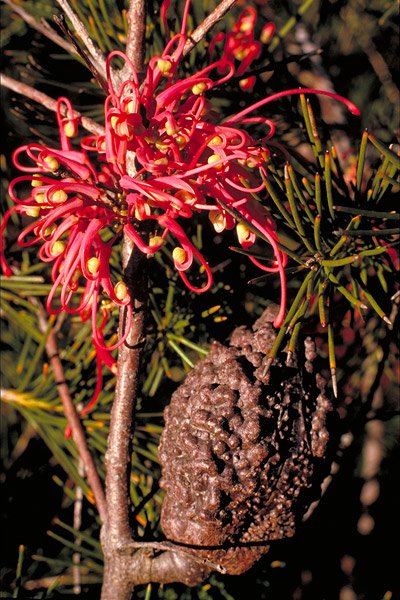