Hakea orthorrhyncha is a medium, spreading shrub which may reach 2-3 metres high by a 2.5 metre spread. There are two recognised varieties; var. orthorrhyncha has flat leaves to 150mm long while var. filiformis has narrower leaves which are often divided. In both varieties the leaves terminate with a sharp point.

Flowers are bright red and occur in clusters along the older stem in late winter and early spring. These are followed by woody seed pods about 40mm long by 20mm wide containing two winged seeds, the usual number for all Hakea species. The pods have a distinct “beak” which gives rise to the common name of the species. The pods do not shed the seed until stimulated to do so by environmental conditions (eg after a bushfire).

This species has been in cultivation for many years but is mainly grown by enthusiasts. Despite its natural habitat in an area of very dry summers, the species has been successfully cultivated in humid, temperate areas of the east coast where it has proved long lived in well drained conditions. It is fairly quick growing and appears to be tolerant of moderate frosts. Although the flowers occur on the older wood, the open habit of the plant means that they are well displayed. The flowers are attractive to honeyeating birds. The species is best grown in an open, sunny position.

Hakea orthorrhyncha is easily grown from seed but may take 6-8 years to flower from germination. The species can be grown from cuttings but these may not be particularly easy to strike. 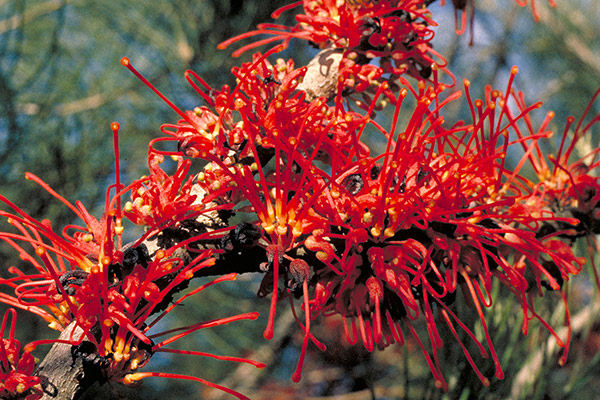