Hibbertia furfuracea is a small erect shrub, 0.5 to 2 metres tall. It has rough linear to lanceolate leaves 2-5 cm long by 0.2-0.5 cm wide. Flowering occurs in spring and early summer. The yellow flowers are 1 to 1.5 cm across. The species is found in sandy soils in hilly areas, sometimes in open forest. Examples can be seen on the Giant Tingle walking track just east of Walpole.

This species has not been commonly cultivated. Though not particularly showy, it is relatively hardy and appears to have a degree of resistance to dieback (Phytophthora). It is easy to grow south of Perth, but needs a bit of extra water over summer in hotter climates. It is a good shade tolerant plant but can become leggy in shady positions, so should be lightly pruned.

This species is easy to propagate from cuttings, but also sets some seed freely (which suggests it should either be grown in areas to which it is indigenous or otherwise away from bushland to avoid any possibility of its becoming weedy away from its natural habitat). 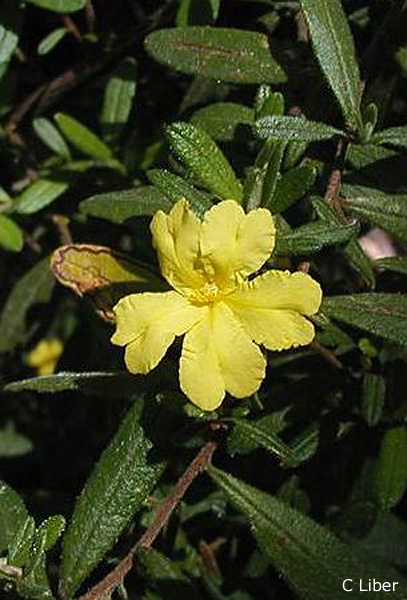