Hibbertia is a genus of around 150 species (though this may increase following botanical revision), most of which occur naturally in Australia. They are generally small to medium shrubs with yellow, buttercup-like flowers.

Hibbertia pedunculata is a small shrub, usually less than about 1 metre high with small, linear leaves to about 60mm long. Prostrate forms are known and one of these is the most commonly seen form in gardens. The yellow flowers occur over a relatively long period in spring and summer.

This is a very commonly grown species which has proven to be hardy in a range of climates. The form commonly seen in gardens tends to “layer” (ie. stems often develop roots at various points along their length). It forms a dense ground cover up to a metre in diameter. It requires sunny or partly shaded locations and reasonable drainage. It will tolerate at least moderate frost and makes an excellent container plant where it may be grown as a ground cover in the same pot as a larger, and more permanent, plant.

Hibbertias, generally, are easy to grow from cuttings and H.pedunculata is no exception. It can also be propagated by cutting off and potting up layering stems. 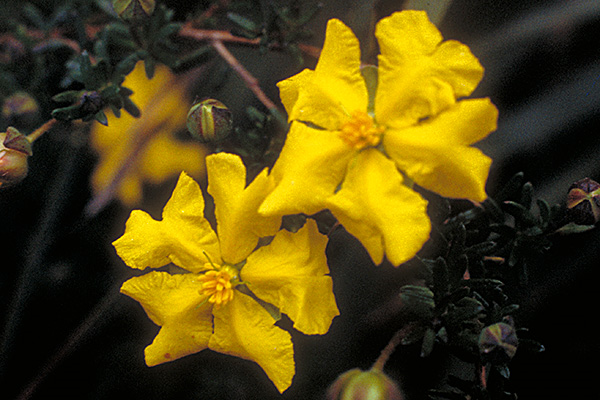