Homoranthus is a small genus of about 8 species and is closely related to the genus Darwinia. The difference between the two genera is based on Homoranthus having single or multiple awns at the ends of the calyx lobes. While botanically significant, the difference is slight….so slight, in fact, that even botanists don’t always agree on where the various species in the two genera should be placed.

Homoranthus darwinioides (previously known as Rylstonea cernua) is a small shrub about 1 metre in height by a similar width. The greyish-green leaves are very small (about 4 mm long by 1 mm wide) and arranged in a decussate manner (each pair of leaves are at right angles to the previous pair on the stem). Flowers occur in pairs on pendulous stalks from the upper leaf axils and are surrounded by leaf-like bracts. The flower clusters are about 1 cm long and are cream in colour, aging to red. The individual flowers have a protruding style about 1 cm long.

This species is reasonably well known in cultivation but not grown as widely as it deserves. It is a very attractive species with a long flowering period and the flowers are very well displayed on the bush. It is suited to well drained, moist soils in full sun or semi shade and will tolerate extended dry periods once established. It responds well to pruning and will accept at least moderate frosts.

Plants can be propagated from seed but seed not readily available. The species can be grown fairly easily from cuttings of firm, current season’s growth. 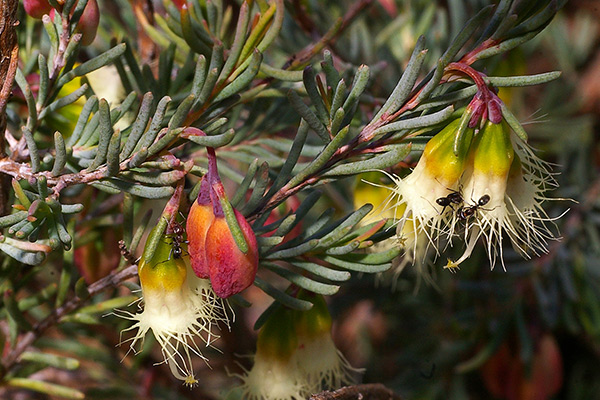