Homoranthus is a small genus of about 8 species and is closely related to the genus Darwinia. The difference between the two genera is based on Homoranthus having single or multiple awns at the ends of the calyx lobes. While botanically significant, the difference is slight….so slight, in fact, that even botanists don’t always agree on where the various species in the two genera should be placed. As an example, Homoranthus porteri was previously known as Darwinia porteri.

Homoranthus porteri is very similar to H.darwinioides which is better known in cultivation. The main differences are the slightly longer “fringed” awns on H.darwinioides. The latter is found in the central west of New South Wales.

H.porteri is a small shrub to about 1 metre high. The leaves are very small (about 4 mm long by 1 mm wide) and arranged in a decussate manner (each pair of leaves are at right angles to the previous pair on the stem). The small flowers occur in pairs on short stems hanging from the leaf axils. The flowers are surrounded by red bracts – the red, fringed calyx lobes protrude from beneath the bracts and the individual flowers have a protruding style about 1 cm long.

The species is virtually unknown in cultivation but is likely to prefer light, well drained soils in semi shade or full sun. It is growing well at Mt. Annan Botanic Garden in western Sydney which indicates that it is adaptable to temperate climates.

Plants can be propagated from seed but seed is not readily available. The species can be grown fairly easily from cuttings of firm, current season’s growth. 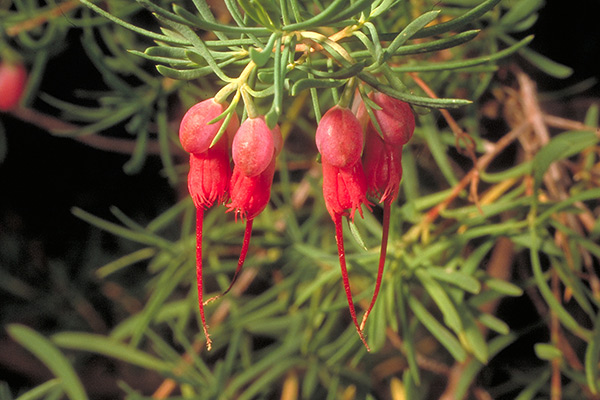